Early morning Saturday, July 13th, a group of dedicated volunteers milled around, waiting to set off on different portions of the trail along Falls Lake (segment 10 of the MST). Unthwarted by the July heat, everyone gathered in a circle as the work day leader, Jeff Brewer, paired people off and assigned them to various jobs. Jeff mentions this part is often like “herding cats” as many volunteers have preferences to the jobs and people they work with. However, the volunteers quickly stocked up on various equipment from the back of Jeff’s truck and drove off to their assigned areas of trail.

Volunteers like the ones I encountered on this July’s work day are critical to the success of trails maintained by non-profit organizations. Friends of the Mountains-to-Sea Trail relies on these people willing to donate their time to the upkeep of trail. These trail work days happen every couple of months and vary greatly in the number of people and demographics each time. This July work day had about twenty volunteers willing to work in the scorching heat. However, Jeff recalled a time a couple years ago when 150 people showed up to a work day, of many different backgrounds and ethnicities.

Not only do the efforts of volunteers make hiking a more enjoyable experience for trail-goers, but it strengthens their own bond with the trail. The volunteers I worked with had been contributing their time to the trail for eight to fifteen years. This commitment garners a love and appreciation for the trail that is quite unique to volunteers. Many of the volunteers have hiked large chunks of the trail and explored its many different locations across North Carolina. 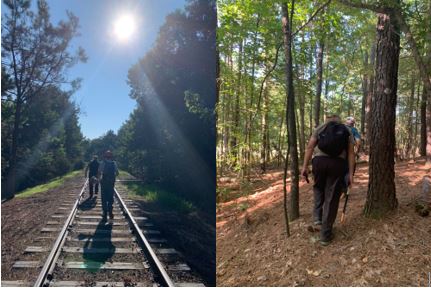 Four volunteers and I arrived at the end of a long stretch of road near Falls Lake, gathering up our tools before we set off on a two-mile hike. We walked along train tracks, eyes peeled for the entrance to the MST. Once we located it, two of the volunteers and I started ahead to cut back overgrowth and remove debris from the trail. As an inexperienced volunteer, I had the job of holding the chainsaw, not using it, as that requires certification! The two other volunteers waited until we got ahead so that we could avoid the sound of their weed-whackers, used to clear summer weeds.

It became evident to me that without the help of those who come out to work days, the path would have been much harder to hike on. Without volunteer maintenance, the trail would be overgrown and covered in branches and fallen trees. In order for local communities and long-distance hikers to come out to the trail, it is important that it is hike-able. And because of these dedicated volunteers, it is!

This thought also occurred to one of the volunteers I was hiking with, before he became a volunteer for the trail. He was hiking a part of the MST and was wondering how it was in such good shape, figuring that there must be people who maintain it. One day, he came across two volunteers with weed whackers along the trail and discovered the answer to his question. Soon after, he started to volunteer his time and has been doing so for the last eight years.

As I followed my fellow volunteers along the trail, I observed how quickly and effectively the trail was transformed. Weeds were cut back, poison ivy snipped, and fallen branches thrown aside. By the time we reached the end of our hike, everyone was drenched in sweat from the summer heat, but obviously satisfied with the work we had just completed.

It was amazing to me to see the dedication that these volunteers have to the trail. They were willing to put in this grueling work simply for the sake of other hikers, and the good of the MST. People like this are absolutely integral to the success of our Mountains-to-Sea Trail, as well as the continued support from hikers and trail-goers.

Check here to see where we have volunteer trail-building task forces, and sign up to volunteer here.  You can also reach out to task force leaders directly with questions and to get added to a task force.