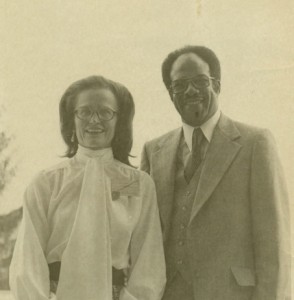 Jim Hallsey, who first put the route for the NC Mountains-to-Sea Trail (MST) on paper completed the 1000-mile trek on Monday, September 3 by hiking, biking and canoeing across the state.

Fittingly, he has finished just as supporters of the MST celebrate the 35th anniversary of the trail’s genesis in a September 9, 1977 speech by then NC Secretary of Natural Resources and Community Development Howard Lee to a National Trails Symposium at Lake Junaluska in Haywood County.

In 1977 Doug Clark, a reporter for The Mountaineer, said that in his speech Lee “surprised perhaps even hardcore outdoorsmen with the outline of an ambitious state project” of a “state trail from the mountains to the coast, a trail leading 450 miles through communities as well as natural areas.”

Lee said the trail “could draw people together and help us know a little more about ourselves and help us understand our neighbors a little better.” He told the 200 trail leaders from across the country “how great it would be if other states would follow suit and if these state trails could be linked together to establish a national trail.”

While inspirational, the speech was also realistic.  He said it would take years to complete and that funds would be hard to come by. He stressed the need for a triumvirate of federal, state and local officials to work toward completion and that he would count heavily on land donations from private and corporate owners.  He charged the Trails Committee to provide him a feasibility report.

For Hallsey, former Friends of the Mountains-to-Sea Trail (FMST) board member and now a volunteer leader of the FMST South Ashe County Task Force, hiking the trail literally turns a dream he helped create into reality.  He had joined the state Recreation Division in 1970 just as there was an explosion of public interest and political will in the country to address the long term recreational needs of the country’s rapidly growing population.  That’s when Congress created the Land and Water Conservation Fund and began providing matching grants to states and local governments for parks planning, construction and land acquisition.

North Carolina’s General Assembly passed the State Trails Act which charged the Secretary of Natural Resources and Community Development to appoint a NC Trails Committee.  Hallsey became the state trails coordinator to develop a plan for a state trails network.

Doris Hammett, then ofHaywoodCounty, was a member of the State Trails Committee. She was also a member of the American Trails Association Board.  With funding help from her county commissioners she was instrumental in luring the National Trails Symposium toLakeJunaluskaand convincing Lee to be the keynote speaker.

During 1978 Hallsey and the Trails Committee prepared the MST feasibility report that Lee had requested as part of the overall effort to design a network of trails throughout the state.  The 20-mile wide MST corridor that Hallsey proposed incorporated  existing federal, state and local parks and forests; recognized emerging local and regional government trail plans, maximized linkages between the state’s most outstanding natural, historical and cultural features and came within close proximity to most of the state’s metropolitan areas.  The corridor was approximately 1000 miles long, rather than the 450 announced by Lee.

Lee fully endorsed the plan. In September of 1978 he attended the signing of a cooperative agreement between the state, the National Park Service, and the US Forest Service that paved the way for the vast majority of trail construction thus far.  More than 500 miles have been completed.

Thirty-five years later Lee said, “The MST is a crown jewel of our state’s national reputation for conserving natural resources.   The success thus far is a testimony to the vision and energy of many generations to leave a legacy for the next ones.  I’m confident the importance of this trail will not be lost on those who follow. They will pick up the mantle and complete the trail even if it is one step or shovelful at a time.”

He added, “Thirty-five years ago I urged private and corporate landowners to donate narrow strips of land needed for this trail.  As the trail moves east from the mountains into thePiedmontand west from the Outer Banks into the coastal plains we will need landowner support more than ever as well as that from our existing partners in regional land organizations, communities, state and federal governments.”

Nearing the end of his journey along the route he helped devise, Hallsey said, “As I have hiked some of the formidable terrain of Linville Gorge, Mount Mitchell and the Pisgah and Natahala forests on rugged trails with huge stones moved by hand to form steps and erosion controls I have realized that nothing is impossible for impassioned humans filled with vision and faith.  These trails were built in difficult places, many of them by senior citizens in their retirement years.  There are additional communities and citizen volunteer groups along the way taking up the dream of the MST.”

He added, “The strategic alliance we helped forge between citizen volunteers and all levels of government continues to be the life blood of the trail.  Regional trail plans have been developed; additional towns and counties are embracing the MST dream and making provision for it in their own local park and recreation plans.”

Just as he and Lee envisioned 35 years ago.

The Mountains-to-Sea Trail goes from Clingmans Dome in theGreat Smoky Mountainsto Jockey’s Ridge on the Outer Banks of North Carolina.  Each year thousands of people hike sections of the trail.  Almost 30 people have hiked the entire 1000-mile length either in sections or in its entirety.  Hikers have included the President of theUnited   Statesand a world renowned endurance runner who completed the MST in just over 22 days.  More than 500 miles of the trail are completed with mostly rural roads providing the links.