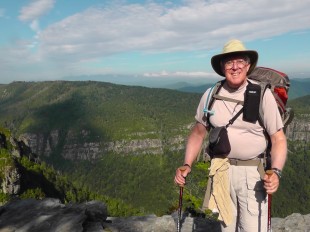 No one has been connected to the Mountains-to-Sea Trail longer than Jim Hallsey. It was his plan for the MST in 1978 that was adopted by the State Trails Committee.  He has been a board member of the Friends of the Mountains-to-Sea Trail (FMST) and currently  is a volunteer leader of the FMST’s South Ashe County Task Force that builds and maintains sections of the trail.  He has persevered through bureaucratic roadblocks, funding deficiencies and even snowstorms to help create and build the trail.  In recent years much of that work has been by hand.  Some of his memories and observations: