Moving a Bridge in Segment 5

Moving a Bridge in Segment 5

Do you know how many bridges there are along the Mountains-to-Sea Trail?

But, I can tell you that the word “bridge” shows up 67 times in the Segment 5 Guide.  I can also tell you that there are 40 bridges in Segment 5. (Conversely, there are only 3 bridges in all of Segment 4). How often do we take a bridge for granted? We may cross over a rushing cascade (or meandering creek for that matter) without ever giving it a second thought. How does a bridge come to be? Who decides that this creek needs a bridge over it, but that creek doesn’t? And, after someone has decided a bridge is necessary in a certain location, how does the bridge actually get there? If it is a fancy fiber reinforced polymer (FRP) bridge like the one over Boone Fork near Price Park, then the parts and pieces may be airlifted in via helicopter and assembled by a crew of professional bridge builders. If the bridge in question is a simple wooden footbridge that crosses over a sleepy stream, then it might be built by a group of college students who are looking for a different way to spend their Spring Break.

In 2009 that is exactly what a group of students from Georgia Tech did with their Spring Break. They built not one, but two bridges- a 12 ft bridge on the south side of Don Hayes Road and a 24 ft bridge on the north side of Don Hayes Road in Segment 5. An untold number of folks have used these two bridges in the 12 years since they were constructed. I have crossed them countless times as I live about a mile from them and often turn to this stretch of trail for hikes and runs- without ever giving it a second thought. That’s the beauty of bridges. Yes, some of them actually are beautiful in their construction (I’m looking at you bridge over Boone Fork near Grandfather Mountain), but for the most part they just…are. They span what ever they’re supposed to span- water, road, ravine, etc, and serve their purpose wonderfully.

Over the last ten years the creek has steadily meandered closer and closer to the footer of the 24 ft bridge on the north side of Don Hayes Road.

Last year a temporary pier was built under the beam for extra safety. The bridge never dropped from level, but the creek worked its way closer to the footer. A few weeks ago volunteers, Doug and John, built a safety ramp and step off until a more permanent solution could be put in place.

Option 3 seemed like it might be the easiest option to implement. I mean, how hard could moving a 24 ft bridge actually be? How many people would it take? How would it actually be accomplished?

The answer is a lot simpler than I thought it would be. On a Friday morning I met up with Shelton (Watauga County Task Force Leader) and Bob (long time Volunteer Trail Maintainer) at the bridge site. Bob brought the donuts and after loading up on sugar we got to work. The first step was to build two temporary supports. Next we lifted the bridge off the existing footers using bottle jacks. We then excavated two new footers, and pushed the 24 ft bridge across a slider beam into its new location well above the meander of the creek. After a little clean up we were done and home in time for lunch. 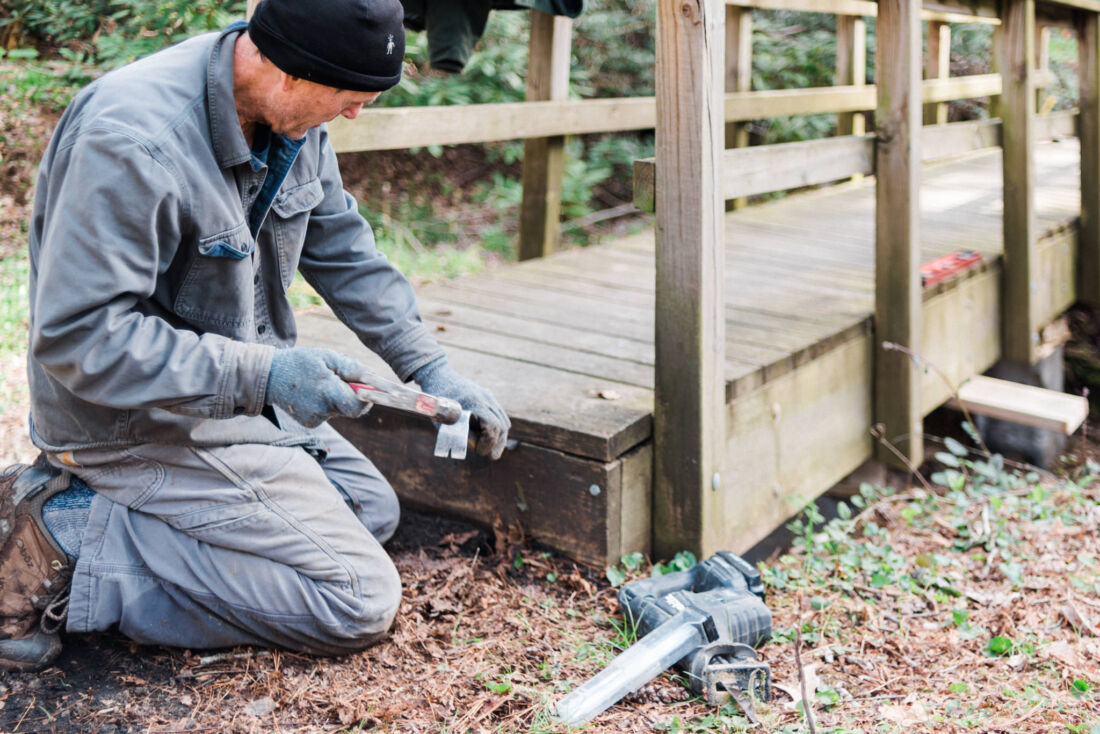 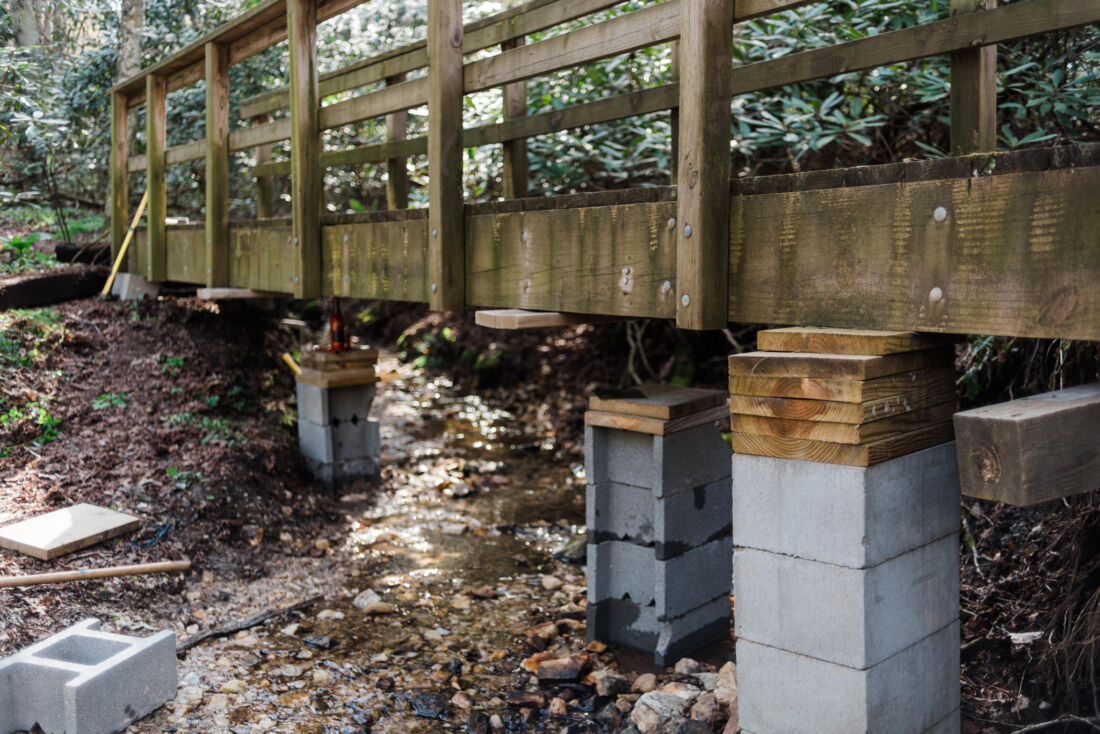 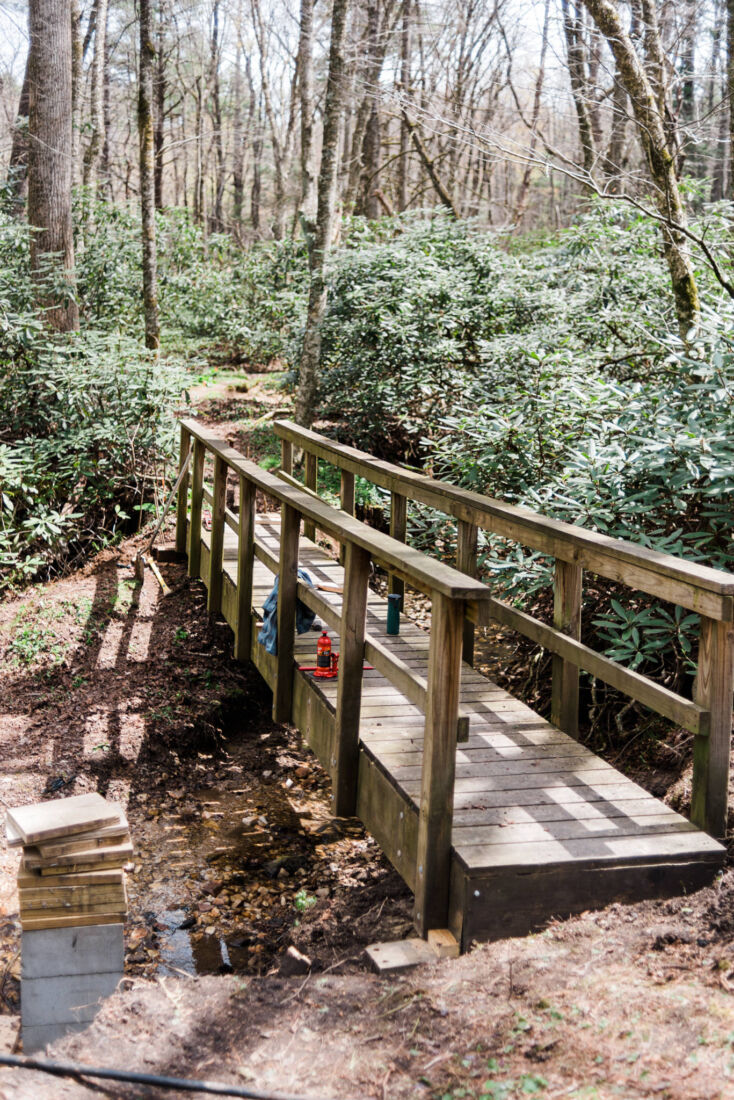 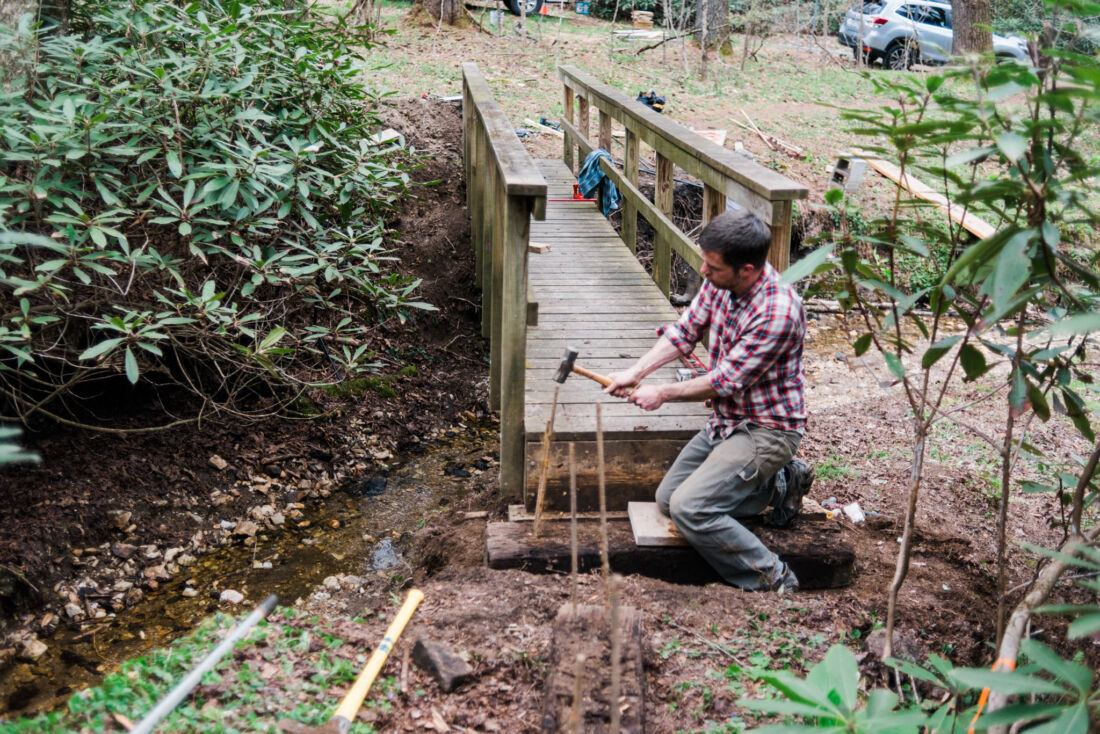 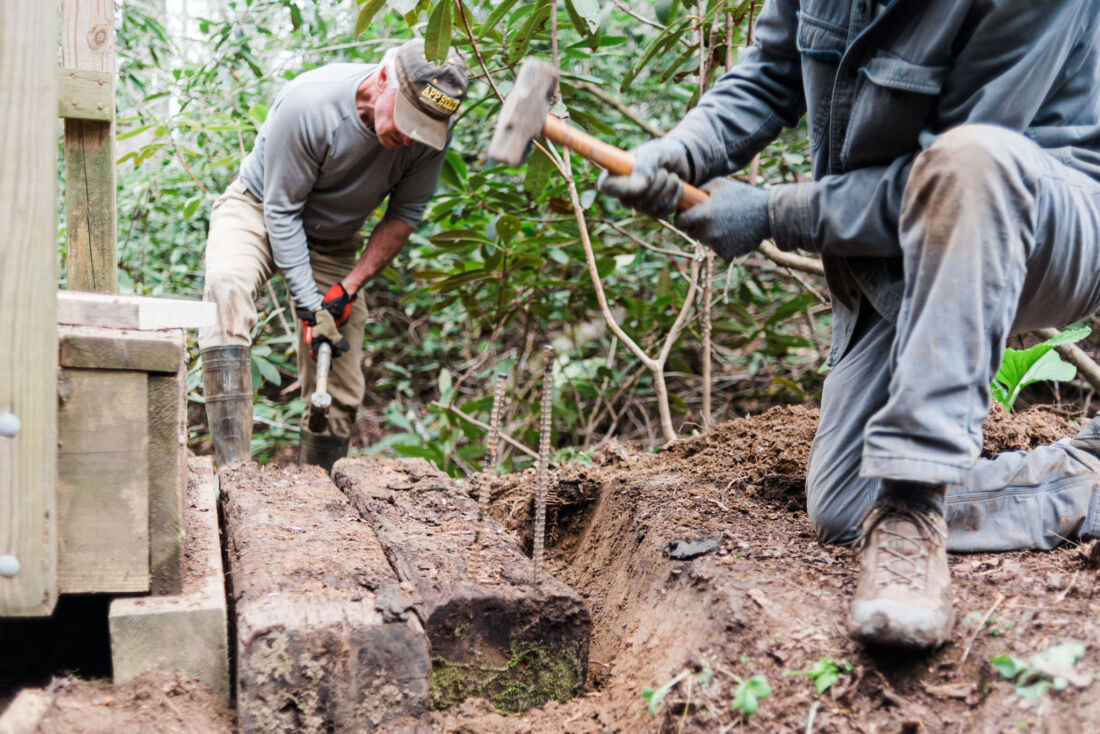 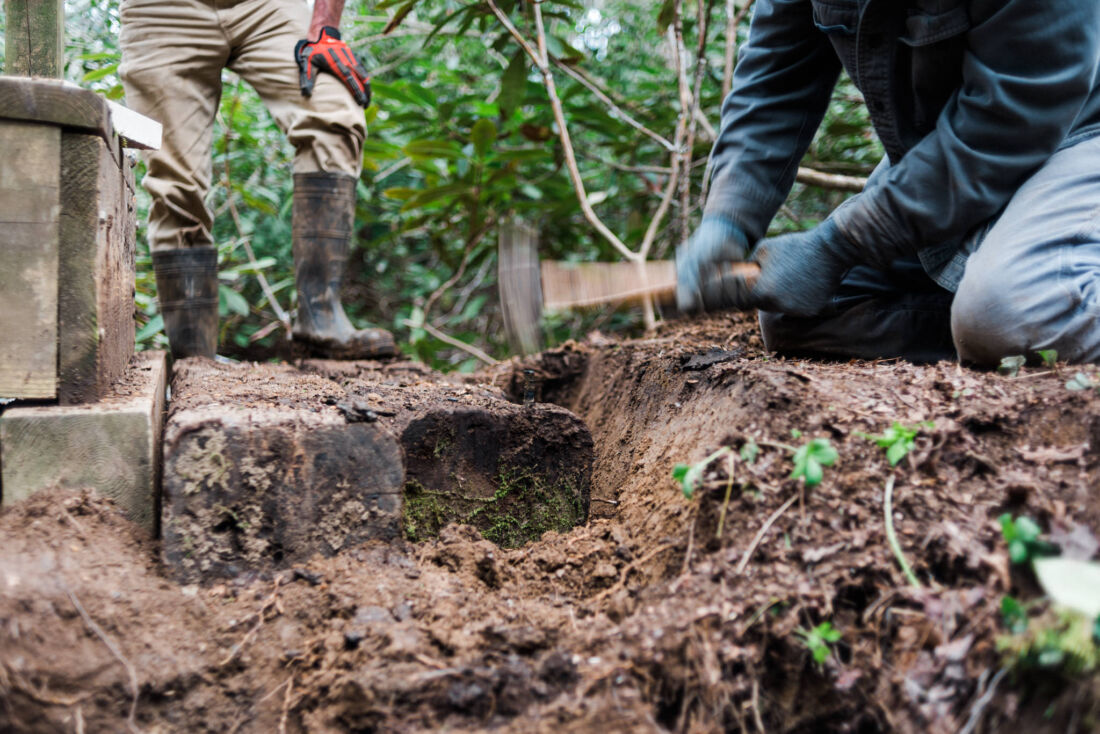 A couple of weeks later a group of volunteers meet back up at the bridge to completely wrap up the project the work on day two included finding cribbing and shore up a washout, build an abutment, making timber steps up to bridge, and grading the trail away from the bridge. Once again, short work was made of the tasks at hand and people even got to splash in the creek! 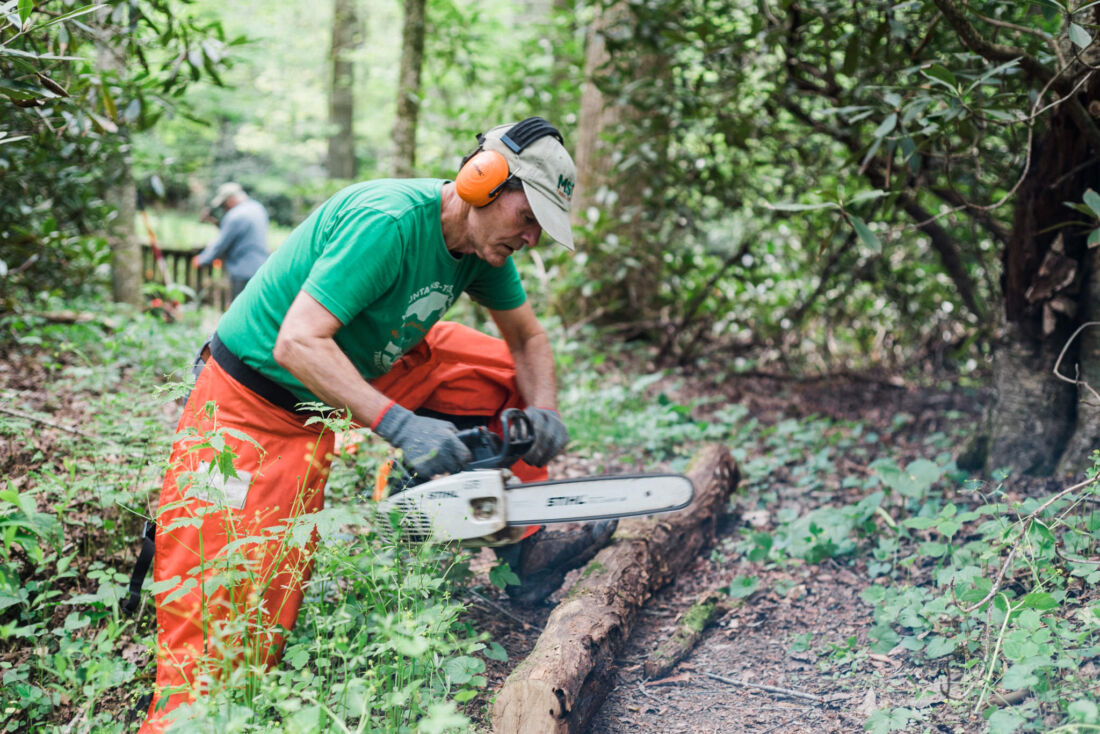 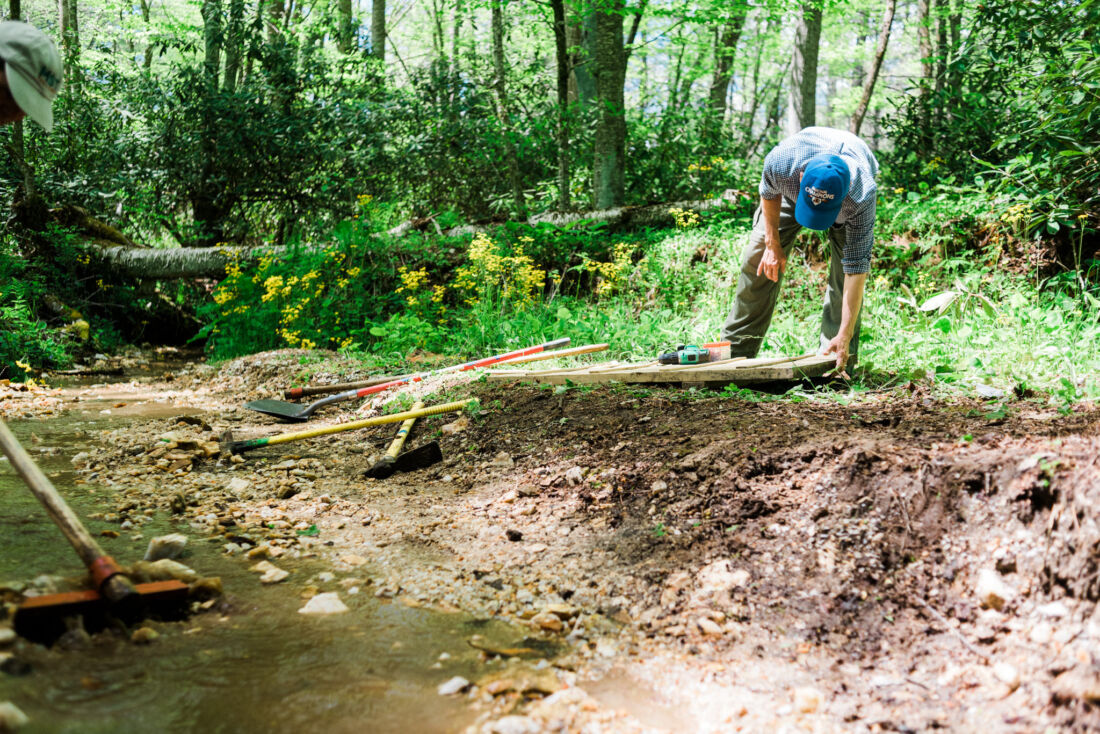 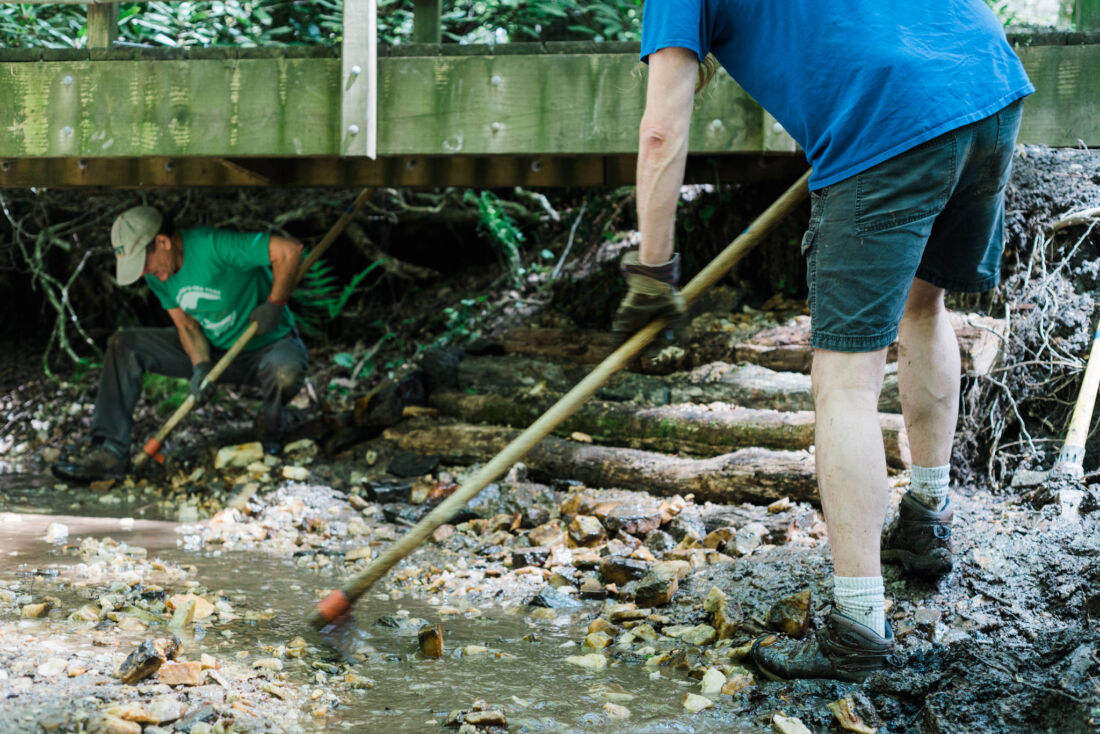 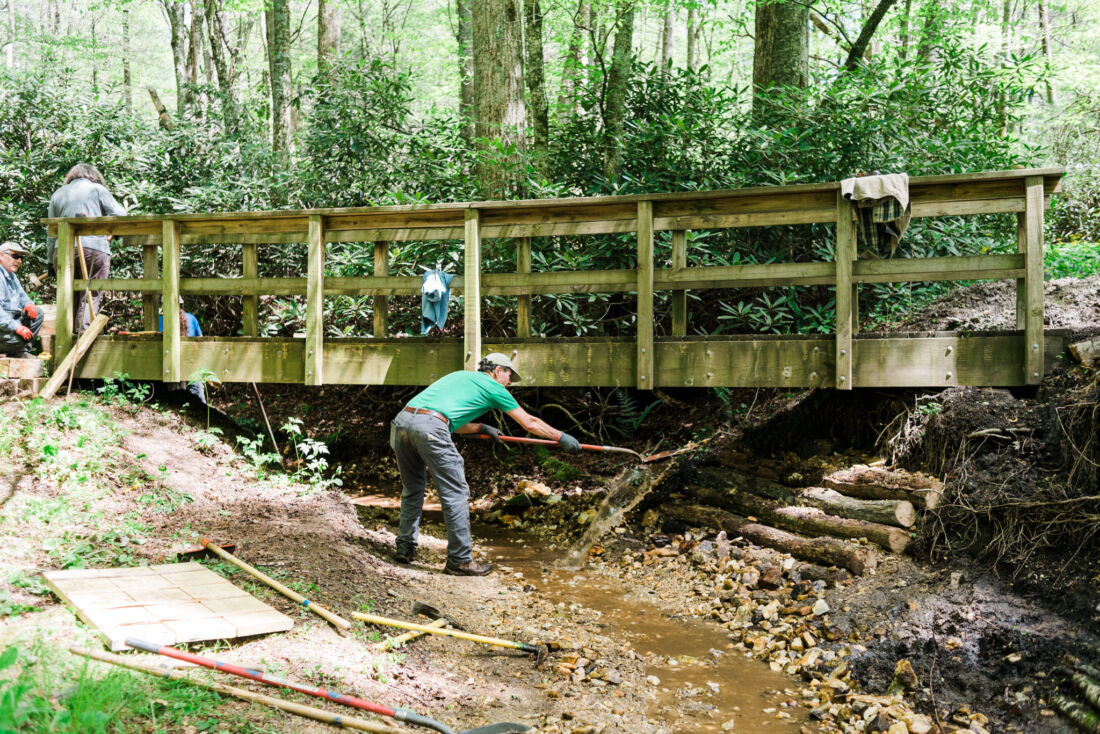 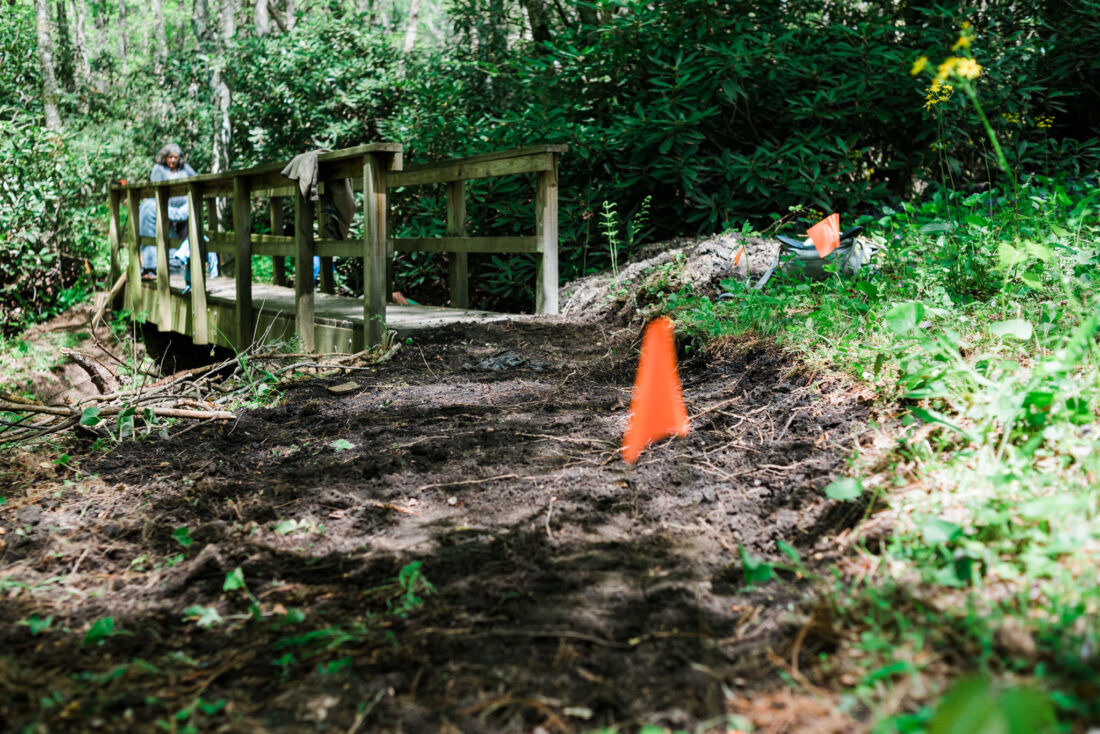 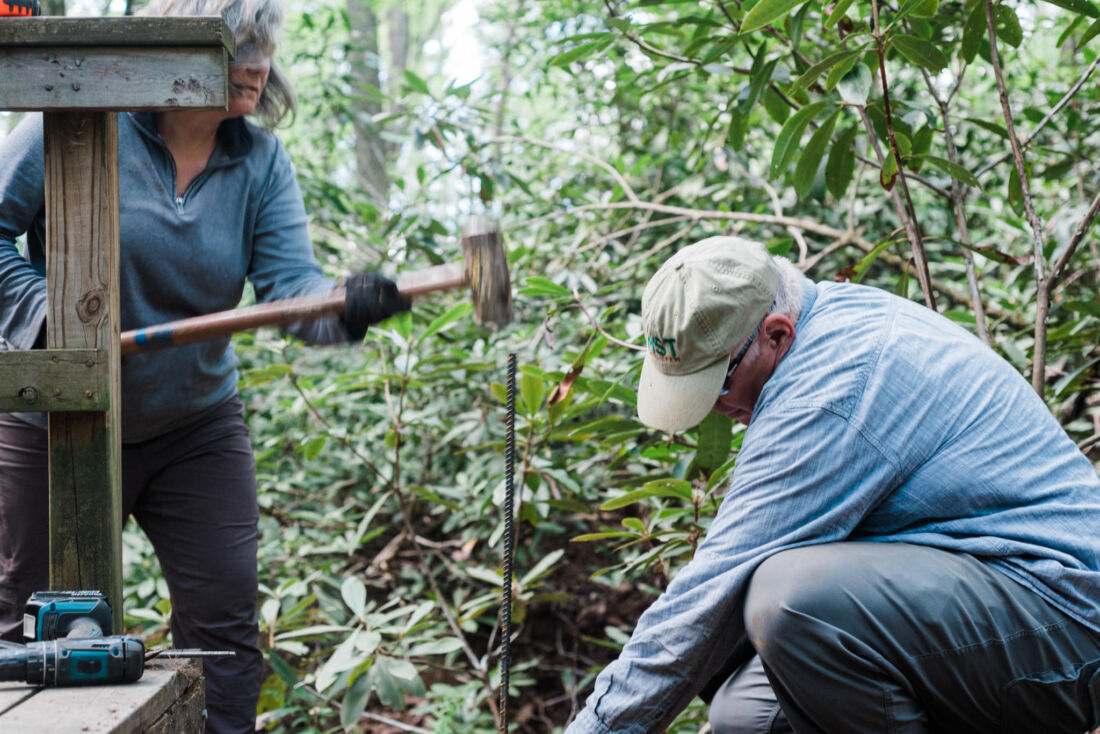 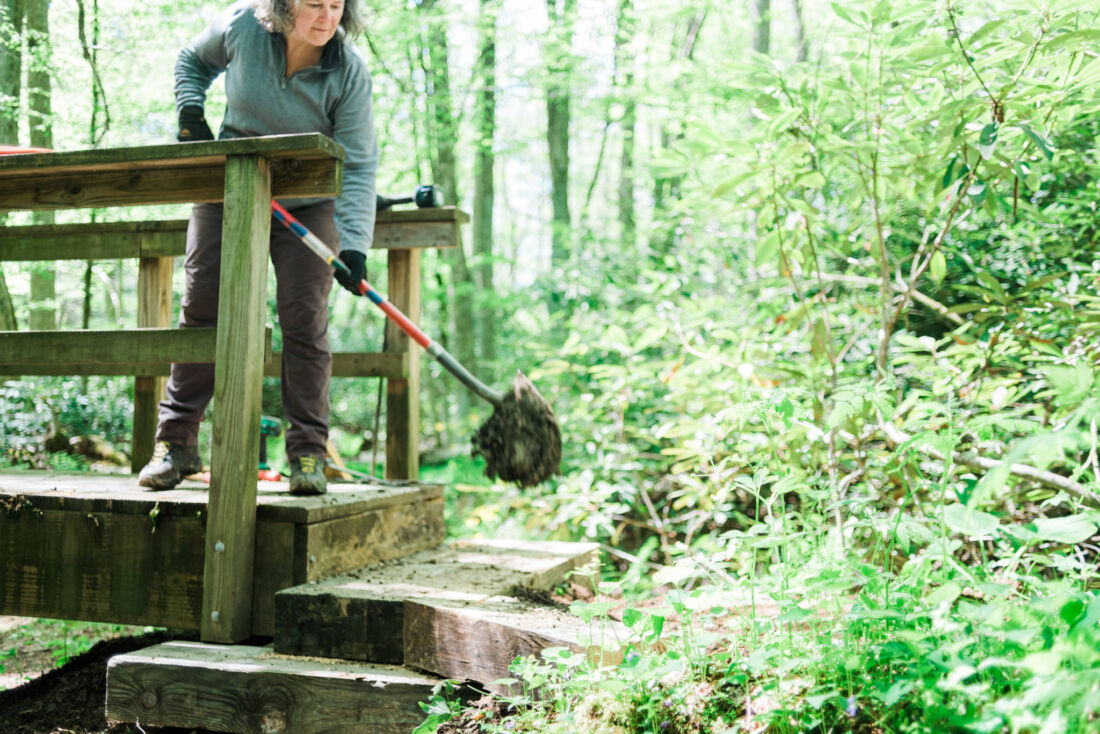 Now, every time I hike or run across the bridge on the north side of Don Hayes Road in Segment 5, I probably will give it a second thought. I’ll think about the time I helped move a 24 ft bridge over a meandering creek. This was my first time doing any sort of trail maintenance in an official capacity, and I can’t wait to get back out there to do some more! 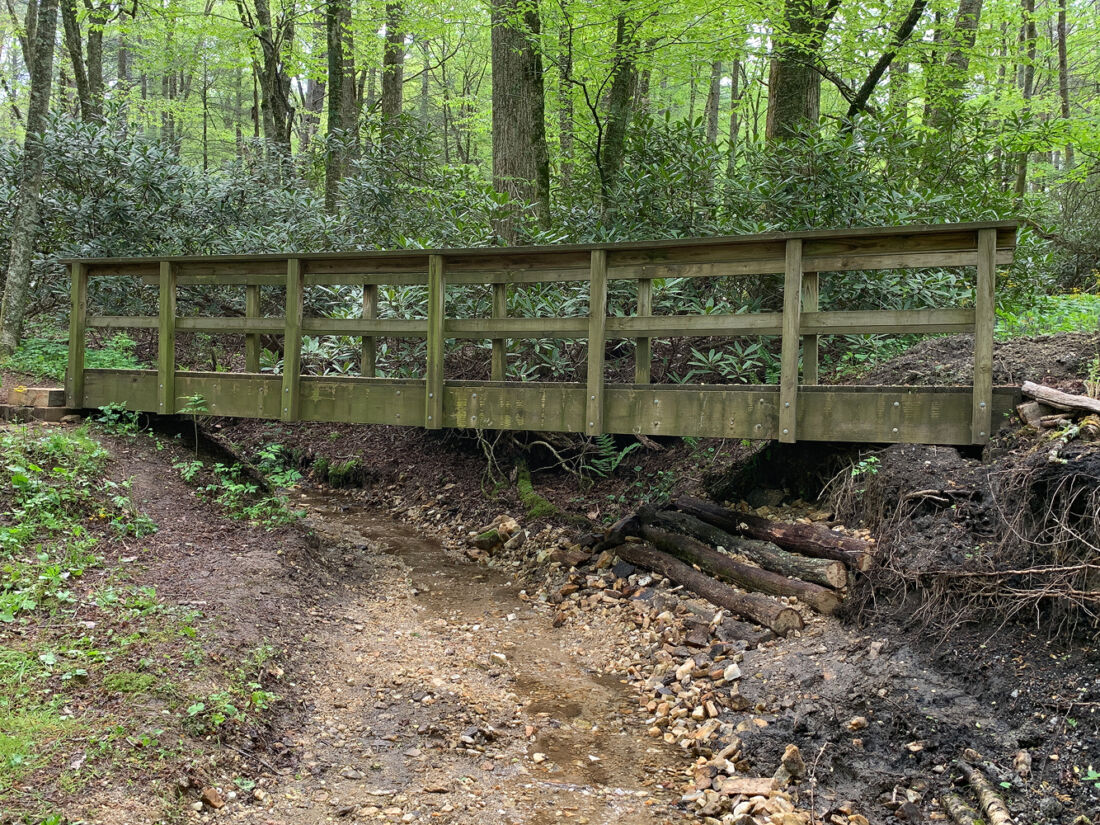 Also, you may find these two links of interest. They show the construction of the bridge in 2009 by the group of Georgia Tech college students while on an alternative Service Spring Break.

If you are so moved, send a word of thanks to our Watauga Task Force by email at info@mountainstoseatrail.org.