Trail Angels are those wonderful individuals that volunteer any amenities they can to long-distance hikers on the Mountains-to-Sea Trail. They are absolutely integral in giving hikers the ability to make it through lengthy treks, and even to complete the trail. Without a place to stay, a meal to eat, or a way to take a shower, it would be much more difficult for hikers to traverse these long distances.

One of our great trail angels, Suzanne Puckett, “loves picking up the hikers and welcoming them to [their] home which [they] call the Puckett Inn.” She mentions the multi-faceted efforts of trail angels that span far larger than just lodging. Trail angels like herself also help with shuttling, getting hikers first aid when they need it, and showing them around their charming trail towns.

Suzanne first got into the business of being a trail angel by the late Joe Hicks, the first trail angel for MST, and a very dedicated one at that. Always having aspired to own a Bed & Breakfast, hosting hikers was the next best thing for Suzanne. Her first two hikers were veterans that trekked the MST on the Warrior Expedition, a hike meant to “walk off the war”. Suzanne, an army mom herself, understands the therapeutic effects such a hike can have for a veteran. This inspiring first experience hosting got Suzanne and her husband Bob hooked. Ever since then, they have been committed trail angels to the MST.

They have hosted ten hikers total, some of which have brought about truly notable experiences. They once had the first female hiker to yoyo the MST stay with them on her way back towards the mountains. (Yo-yoing the trail entails that the hiker walks the 1175 miles one way, and then walks back as well.) 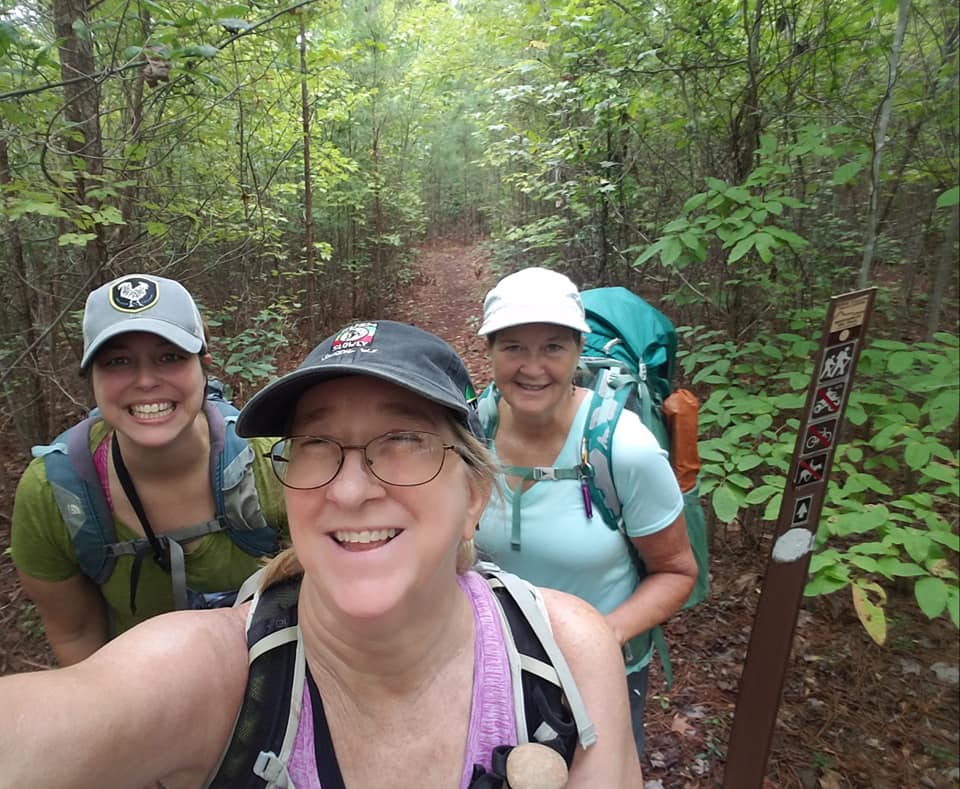 I also talked to another trail angel, Mary Stewart, as I hiked with her along Segment 10 of the MST. She too has hosted around ten hikers in her time, and herself has completed the entirety of the trail. Her passion for the MST is evident in the way she speaks about her experiences and explains her love for it to others.  (On the left, Mary “Angel” hikes with Carrie “007” Bonds and Susan “Kansas” Levy.  Both Angel and Kansas have completed the trail, and are helping Carrie in her section-hike. Photo courtesy of Mary Stewart)

During our hike we stopped to talk to a woman walking her dog on the path, who asked us if we were hikers. Mary started to tell her about the Mountains-to-Sea trail and very successfully advocated for how wonderful it is. The woman was evidently sold and promised that she would visit the MST website and check out other segments of the trail. It was truly amazing to me to see how important the trail is to people like Mary and her true dedication to it.

In Roseboro, Mayor Alice Butler and husband Greg are both supporters in town hall and in practice by greeting and feeding hikers as they walk through Segment 12.  Through Segment 15 near Sneads Ferry, hikers also are greeted with much enthusiasm, and occasionally pizza, by trail angels Tim and Cathy Supple, who love being a part of the MST family.

Carl DeAndre, another dedicated trail angel, discovered the MST in a similar way to the woman we came across during our hike. His wife spotted two hikers while out walking her dog and approached them out of curiosity. Carl and his wife had not heard of the MST, but these two hikers told her all about it, and that they themselves were through-hiking it. Immediately after this Carl volunteered to be a trail angel, as his business happened to be located right along the MST.

These trail angels volunteer their homes and amenities simply because they want to make the lives of long-distance hikers easier. And for Mary Stewart this commitment comes from the fact that she has completed the entire trail herself and knows how integral trail angels are.

Both of these trail angels that I spoke with mentioned how grateful, kind, and appreciative the hikers who stay with them are. Many of them have had long, grueling days or weeks and desperately need somewhere to kick their feet back. And these hikers are also able to take in wonderful trail towns and explore parts of North Carolina in ways they may not have been able to otherwise. As Carl DeAndre mentioned, “the trail is important because it connects the entire state giving people an opportunity to see all the diversity of landscape, people, agriculture, flora and fauna in NC”.

Suzanne also remarked that the Mountains-to-Sea trail has “brought life back to [her] town.” She says that the trail brings tourists from all over to the town of Elkin, and that many local businesses are thriving as a result. Trail towns like hers are honored to be along the route of the MST, and to make hikers feel at home no matter where in North Carolina they are.